In autumn 2007 I was recuperating from a quadruple heart bypass operation and decided that a return to active railway modelling would help me recover and avoid me getting too bored with the UK's generally awful day time telly fare!.  Obviously due to the nature of the op' heavy woodwork and other heavy constructional or work in awkward spaces was out.  Whilst investigating my options for modelling with light tools and card as the modelling medium of choice I discovered the Gnatterbox forum where, at this time, an active challenge was running for registered readers to produce a layout using card baseboards and incorporating a minimum gauge railway as prototype.  To see what the card challenge was all about and some amazing work in card modelling click here.

Thinking up concepts for layouts has never been a problem for me and, as usual, ideas abounded and I started construction work on a small layout based on the local prototype facility; South Coast Steam's loco repair site on Portland morphed with some aspects of the loco' facility at the Evesham Vale miniature railway (My Evesham Gallery)

The steam locomotive above is 35018 British India Line which was at the site between spring 2003 (Above photo taken 2 June 2003) and 24 April 2012. My additional images of South Coast Steam are here.  I had planned to use both 9mm and 16.5mm gauge items in scale 1:24.  As part of this I did complete building a coach for the 15in side and bought some N gauge stock to cannibalise/adapt into 9.5inch gauge "ride astride" miniature coaches.  I already had one completed static card model locomotive, one of  Keith Hunt's card kit drafts (Holy War).

Unfortunately as you will have already gathered I had not discovered the Gnatterbox and the 2007 challenge until November; therefore it was close to the contest's deadline. It eventually became clear that with the slow working speed imposed by the impact of the op' there was not the proverbial "snowball in hell's" chance of completing this one to a satisfactory standard in what had become under a week to go, with no track yet down or scenery started.   Some notes and images are included below on how far I got before deciding to place this project on hold and abandon.

A brainwave struck,.and with regard to the 2007 modelling challenge I was able to build an all card static diorama, completing it in a day for this competition.  Details are here - Pebbles End.

Based on South Coast Steam - a suitable prototype

The layout idea for a creation of  a facility combining the best of South Coast Steam with a miniature and narrow gauge locomotive repairer / builder, such as Alan Keef, is a good one I hope to progress it when time permits.

Rough sketch of the prototype site 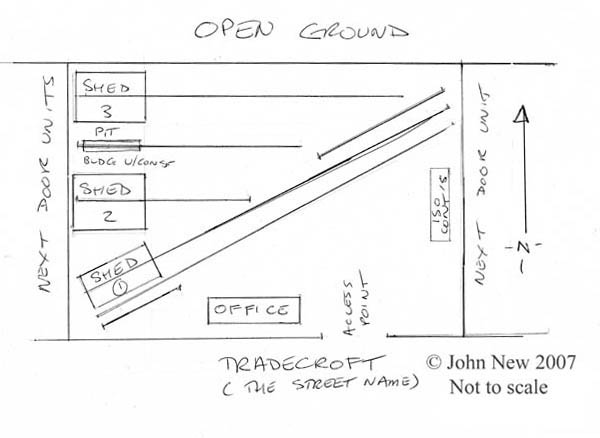 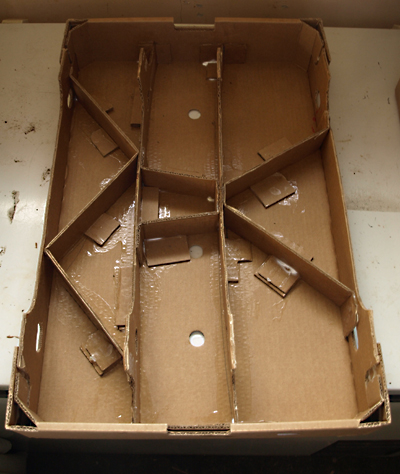 The above box had been put into the garage as an on hold project.  It was checked to see if it was going to be usable as the basis of my intended 2008 Christmas layout. Unfortunately something had fallen against it over the summer and twisted it.  A lesson was learnt from this type of fruit box that has quite significant cut away sides in that the centre section of the box must be supported full depth.  For the second cardboard base layout trial in 2008 the pair of recycled fruit boxes I have selected are of a different type in which the ends have a flat lip.  I think this will ease the addition of suitable under bracing.  They also have much less of a cut away edge and so adding full height stiffening cut from other card should also be easier to apply.  It wasn't done in the one shown above and that may have contributed to the twisting problem as the monocoque shell was not adequately braced. 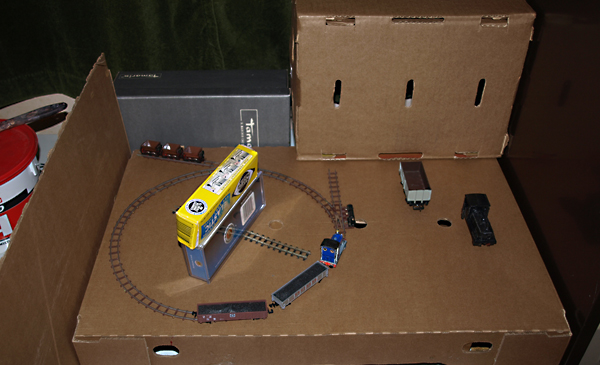 My idea, as set out above, would have been a 9.5 inch gauge circle of track for public use on workshop open days/weekends based on 9mm track on the left hand side.  On the right hand side some 15 inch gauge static items on repair or completed were to be modelled awaiting despatch as represented by the 00 items above.  The 15 inch section extendable later (towards the camera in the shot above) to give a running line.  There is a prototype for mixed gauges like that on one site at the Kirklees Railway in Yorkshire.   Track as shown above was some old Playcraft/Jouef 009 track from the stock box, no longer made, and to 6in radius.

Idea for the development of a wooden hut printy

Continuing the theme above the Milliput box would also have been replaced by a scratch built structure.  In this case a half-relief  option such as the timber shed or pebble dashed modern structure outlined below were being considered.  The grey shoe box was representing a "Portakabin" style office building. with the large brown box to be replaced with a modern style of workshop, in low relief.   Concept sketches for how to make the sheds are shown below and may become a future "printy" option too in due course.  I have an idea for a 4mm kit for these to supplement Keith's kits featured elsewhere on this site.. 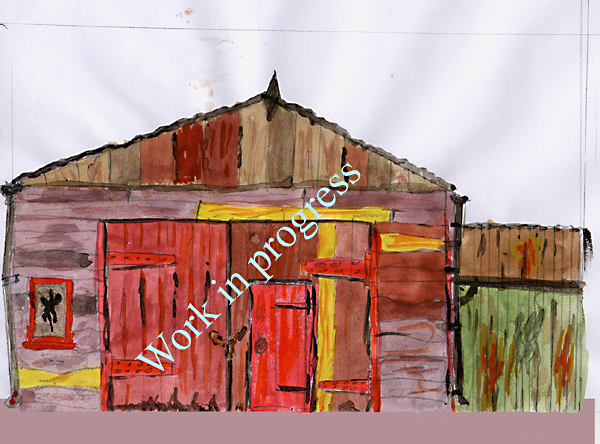 4mm scaled version - A trial build was constructed of this shed facade kit in 4mm scale in late 2007.  However that trial build identified a modification was needed if  wet fix PVA glue is being used.  In this situation an extra layer of thick backing card is recommended when making it using a multi layer "ply" construction technique as the wet nature of the PVA causes the card to buckle.

A 7mm version of the prototype was built successfully for my Pebbles End project in late 2007 with the thin card stiffened by use of photographic mounting board.  The freely downloadable "printy" project is still in draft format due to lack of time to progress it further but the idea has not been forgotten. Click here for a page covering the trial shed build in 7mm or on the thumbnail below for just that picture enlarged.

Alternative draft for a "printy" shed front kit.   NB The loco is Prince William in the workshop / store on the Evesham Vale Railway photographed in 2006.  Any final"printy" of this shed will be scaled so that the track gauge at the doorway is either 9mm or 16.5mm 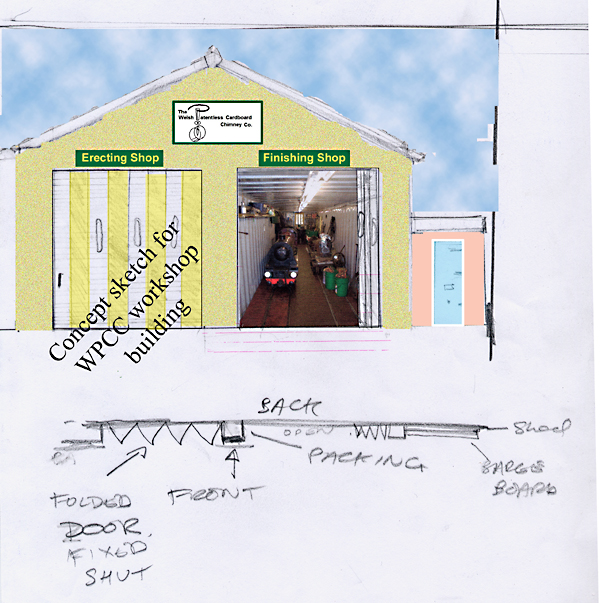 Status of the project as at April 2017 update.

With regard to the outline scheme described on this page, I think it is fair to say that after 10 years of inactivity it has been abandoned as a project likely to be progressed in the foreseeable futire. However, as was said of the Lynton & Barnstaple Railway "....Perchance It Is Not Dead But Sleepeth" as the concept has validity for making a static display base for the many "OO" gauge models I have in store and as test bed for experimenting with modelling techniques.

Using card fruit boxes etc. as the basis for a baseboard worked and was continued for both my Christmas layout 2008 (Reindeer Landing) and the 2009 example, Abbotsea Gardens. It does have a minor drawback in that the lightness creates a movement problem. This can be overcome and is not a long term deterrent. However, topping with Corex as used on Reindeer Landing was unsuccessful. Foam board should also be avoided as in other some other work where I have used the material the paper coating has peeled away from the foam core.

As for South Coast Steam themselves they remain in business, as their listing at Companies House confirms, however from direct observation South Coast Cranes now appear to occupy much of the site and the writer of this entry understands from the enthusiast grapevine that SCS are now involved in the manufacture of steam fittings and parts rather than restoration of locomotives. The Bullied Pacific shown above, and featured in my short photo album covering the facility (35018 British India Line) left the site in 2012 and as at April 2017 is nearing completion to running condition at Carnforth.

The baseboard was retrieved from storage and assessed as an add on for Reindeer Landing. As it was from a different supplier it did not match for height and therefore it is unlikely to be so used. Additionally it was discovered adding a tird box width would make Reideer Landing to big to comfortably fit into either available vehicle. The box will however be paint sealed for the long-term.

One of the two album links above had also failed to update in the auto-updated run following the demise of Fotopic and the error has today been corrected. (NB it was correct in the other link and on the album index page)