By 1999 when the last passenger train excursion to traverse the line ran the tramway had become unique. It was the last main-line street tramway in Britain although others remain in use elsewhere in the world, notably in Switzerland. After that last run over it in 1999 it remained in situ although with many threats to it as the track is a hazard to road users balanced by abortive attempts at revivals. Although I am a rail enthusiast I am also a local resident and can vouch for the fact that the rails did form the hazard claimed and therefore as the tracks are no longer operation retention on the open road sections was difficult to justify when the sole justification would be cosmetic retention for historic interest.

Once many towns and cities had street tramways on which normal standard gauge, main-line, stock ran. However as far as I know the Weymouth line (Plus possibly the Newcastle Quay lines) was unique in that over it ran regular, scheduled, passenger services. To the author's knowledge the line has not been formally closed although south of the King Street crossing it was sold to the local Council in 2009 and prior to that had been placed by Network Rail into out of use category (February 2007) therefore effectively it is closed as no one with the power to reinstate and operate it has any wish to do so.

Description of the line

It ran from the main line down to the Weymouth Quayside wharves and the Ferry Terminal. Not surprisingly therefore it was harbour traffic that created the need for the line and it carried both the predictable freight traffic and also passenger services connecting with the Channel Islands packet steamers.

The branch was formally a branch from the Portland line and not, as it is now, directly off the main line. It leaves the electrified line just north of the main Weymouth station. For the first 800 metres, or so, is segregated between fences with one gated level crossing over the access to a retail area and car park. The new gates being added in 1999 as part of new development in this area. North of this crossing the line remains open but in siding status.

Leaving the segregated section the line crossed the busy King Street on an ungated crossing and from this point on ran as a street tramway for approximately a mile to the Ferry Terminal. The overall length of the line is approximately 1 mile.

From the King Street crossing south the line has been sold by Network Rail to Weymouth & Portland BC. The sale took place in 2009 (See BBC News report).

The line was authorised as part of the Act of Parliament for the Weymouth & Portland Railway. It was constructed to mixed gauge and jointly available to the LSWR and the GWR. However the LSWR were not involved directly with the day to day operation of the quay line and to all intents and purposes it was a GWR line.

Goods traffic commenced on 16 Oct 1865 and ran until 1 Jul 1940 when it was terminated due to the war and the German occupation of the Channel Islands. It then resumed on 18 Sep 1945 until 14 Aug 1972, when regular goods ceased. NB Oil trains for fuelling the ferries continued until 16 Sep 1983. Very infrequent freight trains subsequently ran including cars for import/export in 1983.

In the late 1990s there was a proposal to reinstate part of the line for use with a Parry People Mover but for a variety of reasons that experiment failed and whilst other proposals have from time to time been aired none have ever been financially viable and/or practical and all have failed to materialise. The current status of the line (as I understand it) is that it is operational as a siding north of King Street although there are stop blocks on the line just north of the B&Q access road crossing. These stop/derailment blocks are therefore, the last point southwards over which siding traffic could progress. Personal observation prior to loading this update to live status confirmed that the signalling remains live as 20th July 2013 on this siding.

However regarding the line south of the King Street crossing point the finding of actual facts and dates for the period between 1999 and February 2007 has proven elusive. Clearly in 1999 everything was open and running was permitted. My understanding and memory is that sometime after that date the the Quay Station was closed to passengers and the line declared a siding; meaning that although a train could still run to the Quay passengers could not alight. In February 2007 it is known that Network Rail declared a "Network Change" placing the tramway section as out of use for the two years expiring on 17 February 2009. As you can see from the report included in the Bibliography the local Council bought the south end of the line in 2009 although, as stated above, the section north of King Street was retained by Network Rail and that siding section has subsequently been used at least once.

All the trains towards the end were push/pull or top and tailed due to operational needs of the still running cross-channel ferry service which had necessitated placing a walkway over the toe end of the run-round-loop. This had been required as part of the port "secure" area so that once passengers had passed through the necessary clearances they remained in a sterile area. The remainder of the former passenger station and platforms was "open access" as is the case still in 2013. Although that gangway would have been moveable if regular trains, either freight or passenger, had resumed the cost of that was not justified for the one-off's.

When I first created this page (Spring 2008) I wrote - "there have been no special services run for several years and the de-facto position is that the line is moribund.  Although not formally closed it is extremely unlikely now that we will ever see the running of another excursion". Regrettably that "no more trains" scenario came to pass for the majority of the branch.

Regrettably the date was not recorded (possibly early 2012) the author saw a four wheel rail mounted crane stabled immediately south of the B&Q access road level crossing, this is probably the most southerly point that any rail vehicle has been since 1999.

The 2012 Games specials - Although I did not view any of the usage myself I have been informed by several people that visiting Voyager Units were stabled in the northern spur during the first part of the sailing event period. However it was quickly realised during that event the visitor numbers did not justify the volume of trains visiting and some (those scheduled for the IC125s) were withdrawn after a couple of days. Subsequently capacity existed in Jubilee Sidings and on the days I visited to see what games traffic was around I only saw the Games-extras stabled there.

November 2012 - Although the author was unable to photograph the event he did see Bullied Pacific Tangmere and support coach stabled overnight there during 2012. .The date was not recorded but was almost certainly either overnight prior to working a morning departure rail tour to Paddington on 17th November 2012 and/or the overnight stabling after the return, 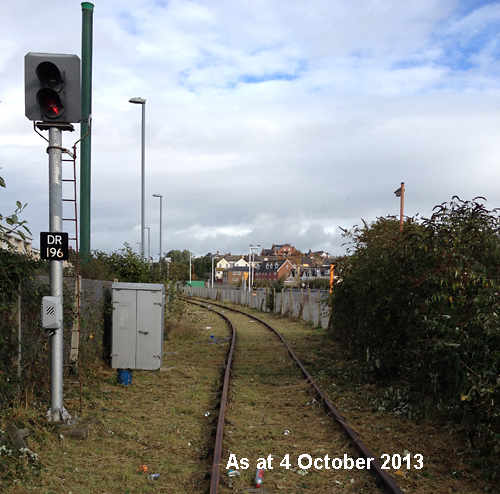 The quay branch was cleared of much of the encroaching overgrowth by early October 2013 but it wasn't clear if that clean up was in reaction to Council complaints (previously known to have occurred) or for operational reasons. The reason subsequently became obvious when the current re-signalling, and track repair, project on the mainline reached the Weymouth area. In addition the adjacent car park was closed temporarily from 1 October onwards and became the contractor's compound. 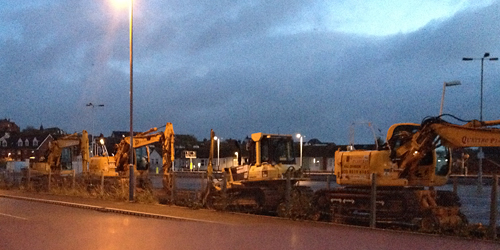 The section of the branch from approximately 10 metres south of the B&Q level crossing northwards was used during October for loading/unloading and then stabling of various items of rail mounted engineer's plant. The picture above taken on 23 October shows these stabled vehicles in the very early morning as I was passing. Unfortunately during full daylight I was unable return for a repeat photo. This use for stabling wheeled plant was seen by the web-master during the weeks commencing Monday 21st, 28th Oct, 3rd and 10th Nov. Reason for them being in Weymouth was mid-week overnight engineering works between Dorchester and Weymouth.

The most recent known usage -

22 June '14 - Not seen personally but I've been verbally informed by several trustworthy sources - the SO Bristol - Weymouth IC125 set was stabled there for the afternoon layover. Reason not known = possibly (probably) for crew route learning/refresher training.

5 July '14 - Class 33 (D6515) and 9 mark one coaches forming the "Royal Wessex" excursion stock stabled during the afternoon. The 9 + loco formation being the maximum length able to be fitted in the signal block. Reason - Three SO services to Weymouth ran on the 5th (The regular SO IC125 from Bristol plus two excursions) and only two available roads in Jubilee Sidings.(see below). Unfortunately the weed-killer train has not returned! 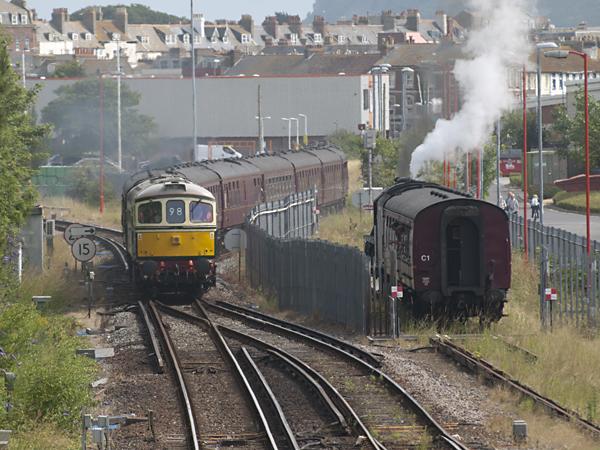 The northern end of the branch continues to be used for rail mounted maintenance vehicles. Although the author has no specific dates to hand the evidence of tyre tracks etc., on the B&Q crossing into has shown this activity continuing into at least September of 2016.

The current status of the line is that after a prolonged period out of use the section south of the B&Q level crossing saw the lifting and removal of the track beginning on 5th October 2020 with removal of the crossing across King Street. The Quay Station is closed and sadly ideas for any form of last run over the route came to nothing. Unfortunately, due to the COVID crisis I did not venture out to take photgraphs of the removal. This link to local news coverage does include a photograph.

Further information/photographs - to be added as time permits