Railways of the Weymouth & Portland area.

Fully useable as a reference document, as it stands, this section is being revised and updated as time permits.  (last update 6 October 2020)

The town of Weymouth has two lines that are still open, the mothballed Harbour Tramway branch line, plus two closed and lifted branch lines. In addition to the branch line link to the mainland, Portland also had a very early, and independent, railway company for the export of stone via Castletown (4ft 6in Gauge), the Admiralty Railway in the Naval Dockyard (Standard Gauge) and many quarry lines (Standard & Narrow Gauge). There was for many years a miniature railway on the Westham side of the Harbour (now closed) and there is currently one operational at the Lodmoor Country Park (Summer season only)

The Portland branch lines had a very complex ownership history, which has been written up by local historian Brian Jackson. (Three volumes published). Portland's railways were, in keeping with the character of the Island, notable for unusual features. The Merchants Railway was a very early pioneer line opening in 1826 one year after the Stockton & Darlington and four years before the Liverpool and Manchester. The Weymouth & Portland and Easton & Church Hope Companies both avoided the grouping in 1923 and survived as independent companies until 1948 (The E&CH in receivership!). The Merchants Railway, as a private company authorised by Parliament, requires(ed) dissolution by Parliament and was still in existence in 1965 although having no assets. (Current status still to be checked) Finally in a situation beloved by modellers, but rare in reality, the Portland branch was jointly operated by the GWR/LSWR and later the GWR/Southern.

The companies who built the railways in, and around, Weymouth were the -

Merchants Railway (Portland) : This line was one of the earliest public railways in world and was therefore the first line in Dorset. It was to 4ft 6in gauge and worked until closure entirely by a combination of horsepower and a rope worked incline. It was authorised in 1825, opened in October 1826 and closed to traffic in September 1939 although all the infrastructure remained in place until sale for scrap in 1957. It carried stone for export from the quarries high up at the north end of the Island to Castletown Pier where the stone was transshipped to sea going shipping. Latterly exchange sidings were also installed at Castletown to facilitate transshipment over the national, standard gauge, railway network.
Most of this line, and several spurs within the feeder quarries, can still be walked although essential road works due to land slippage at Priory Corner have destroyed the site of this terminal point and the Castletown area has also been built over.
Wilts, Somerset & Weymouth Railway : Reached Weymouth 20 Jan 1857 - still open with passenger services operating to Bristol (& some going beyond).

W, S & W Railway (Harbour Branch) : Opened to goods traffic on 16 Oct 1865 and in use until 1 Jul 1940 and then resumed 18 Sep 1945 until 14 Aug 1972, when regular goods traffic ceased. NB Oil trains for fuelling the ferries continued until 16 Sep 1983. Very infrequent freight trains have subsequently run including cars for import/export in 1983. Passenger services commenced on 4 Aug 1889 (Approx) running until 9 Sep 1939 and then from 15 Jun 1946 until 26 Sept 1987. The trains that used it towards the end were all push/pull or top and tailed. The current status of the line is that after a prolonged period out of use south of the B&Q level crossing lifting and removal of the track began on 5th October 2020. The Quay Station is closed and sadly ideas for any form of last run over the route came to nothing. The line north of the B&Q crossing has been used as recenly as 2014 for stabling excursion stock and subsequently by track maintenace vehicles. An additional page on the Harbour Branch is here.

Two of the many points of interest in the history of this line are:-

(a) the very severe curvature (223ft radius) on the original alignment at Ferry's Corner required special coupling arrangements and for the corridor connections to be disconnected. Permitted coaching stock carrying a special permission plate. (Line subsequently realigned in 1939)

(b) during WW2 a train ferry terminal was constructed although as far as is known it was never actually used.

Abbotsbury Railway : Opened 9 Nov 1885. Closed to passengers and goods 1 Dec 1952. Left the main line at Upwey & Broadwey Station to travel to Abbotsbury. One of the features of note was a very tight curve (11.5 chains) on the line immediately west of the Upwey & Broadwey Junction which severely restricted permitted locomotive types.

Newtons Cove proposal : A further line was proposed just before the First World War, by the GWR, as part of a scheme to construct a new cross channel steamer facility in Newton's Cove about a quarter of a mile to the west of the existing harbour mouth. Although ground works were commenced WW1 put paid to this scheme. The "Railway Dock" pub kept the scheme alive, in name only, until it was closed and demolished during the Brewers Quay development some time in the late 1980s.

The Portland Branch : History of the standard gauge railways of Portland is very complicated as it involved more than one railway company. Weymouth & Portland Railway : This railway company built the section from the main line at Weymouth to the first Portland terminus in Victoria Square. Opened 16 Oct 1865 with the original station closing to passengers 1 Sep 1902 when the replacement through station opened alongside. Admiralty Railway : The former W&P siding to Castletown Pier was upgraded and lengthened to run into the Naval Base. Completed in 1877 it opened in 1878 and was predominantly horse worked. Easton & Church Hope Railway : This line was originally proposed solely as a short line on the top of the Island linking quarries to the coastal pier. Totally impractical, it was ultimately built circling the Island and descending the East cliffs joining the Admiralty Railway, and providing a through route to England and the main line.

The passenger service to Portland ceased on 3 Mar 1952 and the remaining goods services were withdrawn on 5 Apr 1965.

South Coast Steam Limited - Tradecroft, Portland.  Opened 2003; A repair facility for full size railway locomotives based on the Tradecroft site opened in early 2003 and 35018 was an early arrival.   Approximate site plan as at 2 Nov 2007 below. 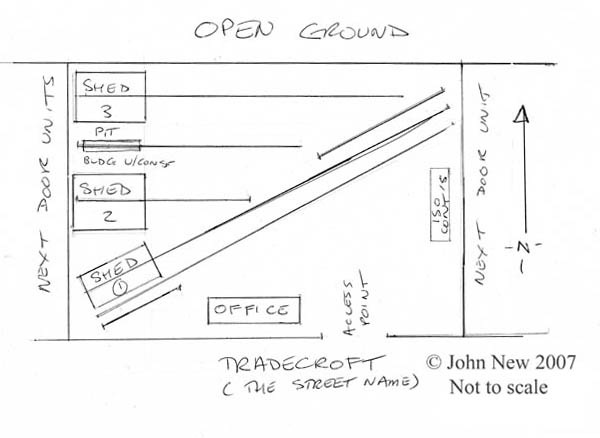 A set of photographs from 2003 and 2007 is available at South Coast Steam Ltd. Bullied Pacific 35018 Port Line wasa long tern resident as was Cunarder a.k.a. 47160 (Ex Swanage Railway).  I have not monitored the site extensively but in addition to the locomotives in the photographs M7 30053 from the Swanage Railway and an unidentified BR 2-6-4T have been noted, either on site or in transit/to from the site. An S160 2-8-0 (no 3273) was also restored on the site.

This listed structure is a former gun emplacement and has surviving sections of 18" gauge track inlaid in concrete.  An excellent independent website with details and photographs of the HAB including the remaining rail tracks is here. Sketch plan of site below. The large arrow was the direction of fire towards the sea. 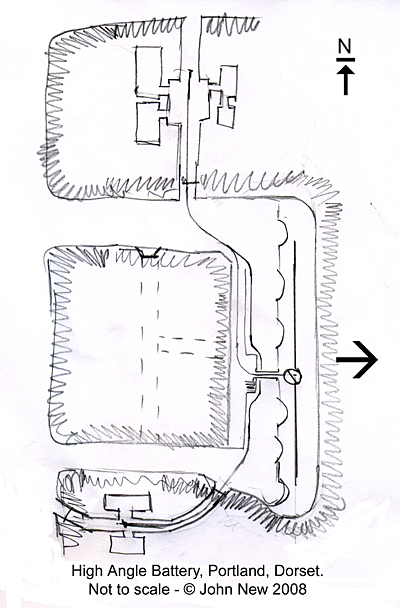 There was for many years a miniature railway on the Westham side of the Harbour (now closed) and there is currently one operational at the Lodmoor Country Park (Summer season only). My photo album of the line is here - Weymouth Bay Miniature Railway (Lodmoor)

These are books I have copies of and personally recommend. There are several videos with Weymouth footage. Archive photographs of the area can be purchased from The Dorset Transport Circle, c/o 55b Spa Road, Weymouth. Dorset.